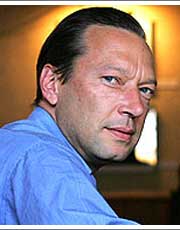 Scott Anderson is no stranger to the follies and tragedies of war. As a war correspondent for such publications as the New York Times, Harper’s, GQ, and Vanity Fair, Scott has covered conflicts in virtually every war-torn zone on Earth, from Beirut to Northern Ireland, Bosnia to Chechnya, El Salvador to the Sudan.

His first novel, Triage, published in 1998 (and made into a feature film in 2009), documented the traumatic effect of war on the mind of a war photographer. His second, Moonlight Hotel, takes place in a small, fictional country “somewhere along the North African coast,” under siege following several major U.S. foreign-policy screw-ups. 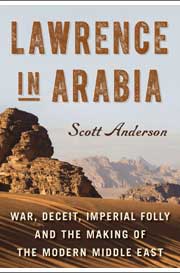 Raised in Asia as the son of an agricultural advisor to the U.S. government, Scott saw first-hand his father’s frustrations “with projects that were often just boondoggles mandated by the government” and saw, too, how such policies can lead to armed uprisings and eventually full-scale war. War Zones, co-edited with his brother, Jon Lee Anderson, focused on conflicts in Ulster, Sri Lanka, El Salvador and Palestine.

Though a successful investigative journalist, Scott turned to fiction partly out of his own frustration with the effectiveness of newspaper coverage. Too many journalists, he says, have “the romantic notion that the rest of the world doesn’t know and you’re going to make them know. In fact, people do know, but they don’t care.”

His latest book, Lawrence in Arabia: War, Deceit, Imperial Folly and the Making of the Modern Middle East, is Scott’s return to nonfiction, but this time with a difference. Rather than rely on mere reportage, he traces the current conflicts in Syria, Iraq and Afghanistan back to their inceptions: the period after the First World War when British Colonel T.E. Lawrence led an Arab uprising against his own country’s imperial rule.

Lawrence in Arabia challenges every received notion of how the Middle East was formed, and who is responsible for the current conflicts in one of the most vital territories in modern history. Scott Anderson wants to make you care.