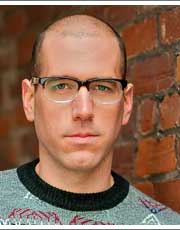 When chosen as one of The Globe and Mail’s “Fab five: Canlit’s hottest up-and-comers” last summer, Iain Reid told the interviewers “I have failed to achieve a great, great deal.”

That turns out to be a good thing in Iain’s first book, One Bird’s Choice: A Year in the Life of an Over-educated, Underemployed Twentysomething Who Moves Back Home. It’s the tale of Iain’s return to Lilac Hill, his parents’ hobby farm in eastern Ontario, when he landed a promising part-time job for CBC Radio in Ottawa after a decade of living in Toronto. 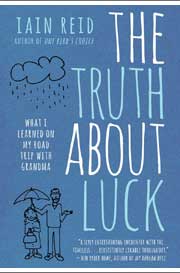 “A laugh-out-loud comic memoir,” Maclean’s wrote of One Bird’s Choice, “with a cast of characters including a mom who suspects she may be allergic to her cellphone, an English professor dad who loves shredding redundant documents, and a fleet of cats, dogs, ducks, sheep and one guinea fowl named Lucius.” Published by House of Anansi in 2010, it won the CBC Bookie Award for Best Nonfiction Book that year.

In The Truth About Luck – Iain’s second memoir, also from Anansi, released early in 2013 – he invites his grandmother on a five-day vacation, which turns out to be a Kingston “staycation” in his basement apartment. Iain escorts his grandma to local attractions and restaurants, the two exchange memories, and she begins to reveal details of her inspiring life story.

Iain’s work – which is peppered with self-deprecating humour, odes to cereal, especially Mini-Wheats, and astute observations about everyday life and its extraordinary aspects – has appeared on NPR, CBC Radio, Definitely Not the Opera and Metro Morning radio, and in publications such as The Globe and Mail, Reader’s Digest, and The Classical. He writes regularly for The National Post about books and writing – including columns on the pleasures of re-reading favourite books, lying on the floor to write, and taking Eggo waffle breaks when he’s productive. He contributes old-fashioned letters to Kingston Life, and is a graduate of Queen’s University.