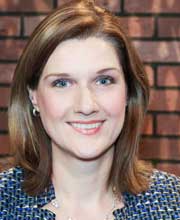 If you live in Kingston, and have a TV, you probably recognize Julie Brown. A native of Toronto and a graduate of the University of Toronto and Sheridan College, Julie Brown is a ten-year veteran of the CKWS television news team. After working as a videographer for Rogers Television and CHEX-TV, Julie joined CKWS in 2003.

Her role at CKWS has allowed her to cover a number of great stories. Some of her favourites include local reaction to the Royal Wedding, participating in CFB Kingston’s Soldier for a Day, discovering new technologies at Queen’s University, and interviewing some of Kingston’s and Canada’s biggest newsmakers.

When she arrived in Kingston from Peterborough, she didn’t know a soul, so she became a volunteer. Since then, she has become an active member of the community, and supports numerous charities, including Easter Seals, CNIB, and the Ban Righ Centre. She has served as chair of United Way’s “Success by Six” program since its inception.