An Afternoon with Louise Penny 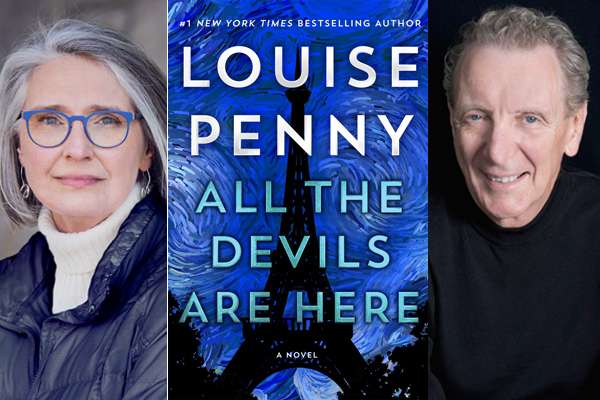 Join us for the exclusive Canadian appearance of one of Kingston WritersFest’s most requested guests, award-winning author Louise Penny. In this special fundraiser event, Louise will chat with veteran broadcaster Eric Friesen about her acclaimed career, her made in Canada approach to mystery, and her brand new book, the 16th novel in the Chief Inspector Armand Gamache series, All the Devils Are Here. You won’t want to miss it!

All the Devils Are Here opens in Paris as the Gamache family gather for a bistro dinner with Armand’s godfather, the billionaire Stephen Horowitz. Walking home together after the meal, they watch in horror as Stephen is knocked down and critically injured. When a strange key is found in Stephen’s possession it sends Armand, his wife Reine-Marie, and his former second-in-command at the Surete, Jean-Guy Beauvoir, from the top of the Tour d’Eiffel, to the bowels of the Paris Archives, from luxury hotels to odd, coded, works of art, and to gruesome discoveries and shameful secrets from Stephen’s past. It sends them deep into the secrets Armand’s godfather has kept for decades.

On Saturday, September 5, you will receive an email with a private link to the livestream, as well as instructions on how to watch the event.

Sunday, September 6
1:00 pm EST
Register below with a minimum suggested donation of $10 (you will receive a charitable receipt from CanadaHelps)

Order a copy of Louise’s book! Books are available for sale at the official bookseller of Kingston WritersFest, Novel Idea Books. Order online or visit them in-store at 156 Princess Street.

Louise Penny is the author of the #1 New York Times and Globe and Mail bestselling series of Chief Inspector Armand Gamache novels. She has won numerous awards, including a CWA Dagger and the Agatha Award (seven times), and was a finalist for the Edgar Award for Best Novel. In 2017, she received the Order of Canada for her contributions to Canadian culture. Louise lives in a small village south of Montreal.

Eric Friesen is a broadcaster, writer and speaker.  He was a network host and executive for both CBC Radio and Minnesota Public Radio (NPR).  For CBC, he hosted such programs as Studio Sparks, Onstage at Glenn Gould Studio, and In Performance, among many others.  Eric was the founding Program Director for Winnipeg’s new classical and jazz station, Classic 107, and is a Consultant to Radio New Zealand’s Concert Network.  He teaches at Victoria College University, Toronto, and co-hosts a book club in the Maximum Unit of Collins Bay Institution in Kingston. Eric Friesen is a Member of the Order of Canada.