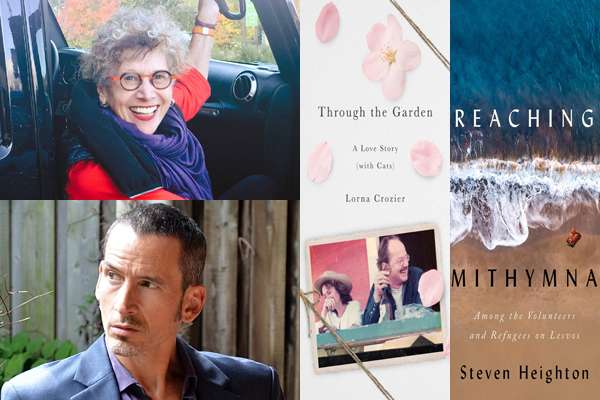 With the third event in our series of pre-season events, we welcome two beloved KWF alumni to our virtual stage. Join poets and authors Lorna Crozier and Steve Heighton for a wide-ranging conversation on poetry, literature and life, with a sneak peek at their forthcoming memoirs!

In Through the Garden: A Love Story (With Cats), Lorna Crozier reflects, with unflinching honesty and tenderness, her four-decades-long partnership with fellow poet and author Patrick Lane. After Patrick became seriously ill, Lorna turned to her writing as a way of making sense of her grief and for consolation. She revisited her poems, tracing her own path as a poet along with the evolution of her relationship with Patrick. The result is an intimate and intensely moving memoir about the difficulties and joys of creating a life with someone and the risks and immense rewards of partnership.

Steven Heighton’s life took its own unexpected turn when he made an overnight decision to travel to the frontlines of the Syrian refugee crisis in Greece and enlist as a volunteer. In Reaching Mithymna: Among the Volunteers and Refugees on Lesvos, he recounts his arrival on the isle of Lesvos with a duffel bag and a dubious grasp of Greek, his mother’s native tongue, and his work on the landing beaches and in an ad hoc transit camp providing simple meals, dry clothes, and a brief rest to refugees after their crossing from Turkey.

for their support of this presentation.

An Officer of the Order of Canada, Lorna Crozier has been acknowledged for her contributions to Canadian literature, her teaching, and her mentoring with five honourary doctorates. Her books have received numerous national awards, including the Governor-General’s Award for Poetry. The Globe and Mail declared The Book of Marvels: A Compendium of Everyday Things one of its Top 100 Books of the Year, and Amazon chose her memoir as one of the 100 books you should read in your lifetime. A Professor Emerita at the University of Victoria, she has performed for Queen Elizabeth II and has read her poetry, which has been translated into several languages, on every continent except Antarctica. Her latest book, What the Soul Doesn’t Want, was nominated for the Governor General’s Award for Poetry. In 2018, Lorna Crozier received the George Woodcock Lifetime Achievement Award. She lives on Vancouver Island.

Steven Heighton’s most recent books are a novel, The Nightingale Won’t Let You Sleep, which has appeared in French and Ukrainian translations and has been optioned for film, and a poetry collection, The Waking Comes Late, which received the Governor General’s Award for Poetry. His novel Afterlands has appeared in six countries; was a New York Times Book Review editors’ choice and was cited on year-end lists in the USA, the UK, and Canada; and is in pre-production for film. His short fiction and poetry have received four gold National Magazine Awards and have appeared in numerous publications including London Review of Books, Granta, Best American Poetry, Tin House, Zoetrope, and five editions of Best Canadian Stories. Steve has been nominated for the Governor General’s Award, the Trillium Award, and Britain’s W.H. Smith Award, and he is an occasional fiction reviewer for the New York Times Book Review.