Ahmad Danny Ramadan is an author and journalist with bylines in the Washington Post, The Guardian and Foreign Policy. His history of working with organisations in the Middle East as well as his personal experience as a Syrian refugee have made Ramadan passionate advocate for social justice and LGBTQ refugees’ rights. “There’s an active role that every single Canadian…has to play in supporting refugees and newcomers…and making them feel equally Canadian to you,” he says, “open doors, open hearts.”

Danny has published two short story collections in Arabic. The Clothesline Swing, inspired by One Thousand and One Nights, is his first novel in English. The book depicts the harrowing journey of two male lovers escaping the aftermath of the Arab Spring through Syria, Lebanon, Turkey, Egypt and finally, a new home in Canada. Publishers Weekly says his stories “reverberate with meaning and emotion” while The Vancouver Sun called the book “immersive and disarming. And as a glimpse of regions with deep-seated homophobia, the novel’s a bracing reminder of how many forms oppression can take.”

Danny is currently the Community Outreach Coordinator of QMUNITY, British Columbia’s Queer Resource Centre. He was also the Grand Marshal for Vancouver’s 2016 Gay Pride Parade. He lives in Vancouver, BC. 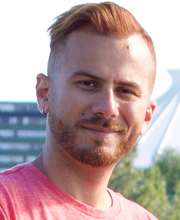