“He had me at bacon,” Rick Mercer says. “Ali Hassan has written perhaps the funniest and most heartfelt Canadian memoir yet.”

Ali Hassan is a stand-up comic, actor, and radio & television personality who has performed on stages across Canada and the world. He is the host of CBC’s Canada Reads, as well as Laugh Out Loud on CBC Radio and SiriusXM. He is also a frequent guest host of q, CBC’s premiere national arts and entertainment show. His comedy has been performed at the Just For Laughs Festival in Montreal and Toronto’s JFL42.

A Canadian Comedy Award nominee, his solo show, Muslim, Interrupted, was performed at the world’s largest comedy festival, the Edinburgh Fringe Festival. He has appeared in three award-winning films, Breakaway, French Immersion, and as the memorable Lebanese “Uncle Stevie” opposite Seann William Scott, Jay Baruchel, and Eugene Levy in the hockey hit Goon, in addition to other film and TV roles.

Ali’s memoir, Is There Bacon in Heaven? hits shelves this September. The comedic book grew out of his one person show, Muslim, Interrupted, and it explores the ins, outs, ups, and downs with faith and embracing his heritage while still following his passion.

He lives in Toronto, Ontario, with his family. 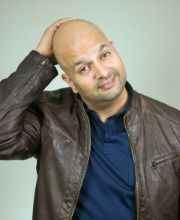 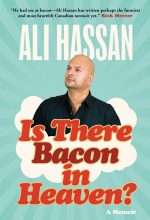