“Strangers With the Same Dream explores the dark side of utopian longing with terrific sensitivity, intelligence, and attention to beauty. Alison Pick is one of the wisest and most compassionate of writers.” — author Lauren Groff

Alison Pick started her career on a high note, winning the Bronwen Wallace Award for the most promising young writer in Canada. She has since become a best-selling, internationally published, and award-winning writer of three volumes of poetry, several novels, and a memoir. Far to Go, was nominated for the Man Booker Prize, won the Canadian Jewish Award for Fiction, and made several “Top Ten of 2010” lists, and her memoir, Between Gods, was a finalist for the BC National Award for Non-Fiction.

Her latest work, Strangers With The Same Dream, is a spare, and brilliantly written story set in the 1920s in the Middle East. It follows a band of young Jewish pioneers, many escaping violence in their homelands, who set out to realise a utopian dream: the founding of a kibbutz on a patch of land that will, twenty-five years later, become Israel.

Alison lives in Toronto. She is on the faculty of the Humber School for Writers and the Sage Hill Writing Experience.

Appearing in: 43. Wine, Women, and Words 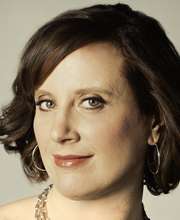