Anakana Schofield burst onto the Canadian literary scene with her award-winning debut, Malarky, a wild experimental romp of a book that charmed readers and critics alike. Her second book, Martin John, was shortlisted for the Giller Prize, the Ethel Wilson Fiction Prize, the Goldsmiths Prize in the UK, named a New York Times Editors’ Choice, and landed on numerous best book of the year lists. Her writing and reviews regularly appear in The Guardian, The Irish Times, and The Globe and Mail, among others.

This year, Anakana returns with Bina: A Novel in Warnings, a darkly comic novel about a woman who has, quite simply, had enough. Author Rachel Cusk calls Bina “fiction of the rarest and darkest kind, a work whose pleasures must be taken measure for measure with its pains. Few writers operate the scales of justice with more precision… The novel’s themes – male violence, the nature of moral courage, the contemporary problems of truth and individuality, the status of the female voice – could hardly be more timely or germane… yet her writing is so vivacious… she is the most compassionate of storytellers, wearing the guise of the blackest comedian.” 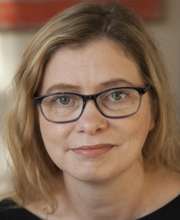