“Every book I read seems to change the way I think about fiction. Sometimes they drive me to despair by indicating how much more we need to demand from our fiction and other times they send me into orbit with the possibilities they reveal,” says novelist Anakana, or AK, Schofield.

Her own work most definitely falls into the second category. Anakana burst onto the Canadian literary scene in 2012 with her brilliant début, Malarky, a wild experimental romp of a book that won the hearts of ordinary readers and the minds of critics alike.

“Malarky is like nothing else, and what everything should be … This is a book that will leave you demanding more of everything else you read, says books blogger Kerry Clare. “Clever, witty, imaginative, and intriguing,” adds the Irish Times.

Malarky won the Amazon.ca First Novel Award and the Debut-Litzer Prize for Fiction in the United States and was a finalist for the Ethel Wilson Fiction Prize. It appeared on sixteen Best Books of 2012 lists and was selected as a Barnes & Noble Discover Great New Writers Pick.

Anakana’s eagerly anticipated second book, Martin John, is, she says, a “footnote,” since it follows the adventures of a character that readers of Malarky will recall as Beirut. Innovative in form, and challenging in subject, Martin John presents a deeply imagined, almost operatic view of marginal characters trapped in the absurdities and perversions of systems: mental, social, and familial. “Profane, strange, hilarious, and necessary, Martin John is a beguiling triumph,” says author Patrick deWitt.

Anakana was born and raised in Ireland, where her mother still keeps Kerry cows and goats in County Mayo. These days, she makes her home in Vancouver, where she pursues a deep interest, “alongside writing sentences and novels, (in) reading, the weather, bird flu and labour history,” in celebration of which she stages interdisciplinary events that illuminate forgotten working class texts. 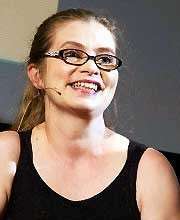