Andrew Westoll is an award-winning journalist and author who has written about science, travel, conservation, culture, and chimps. It’s hard to resist bad puns when referring to Andrew’s very successful writing career. Phrases like “he doesn’t monkey around” must be suppressed. However, it’s true that as a former primatologist-in-training, whose memoir, The Riverbones, was based on his time in the jungles of Suriname, and who then spent two years working with chimps rescued from research labs before writing the Charles Taylor Prize-winning The Chimps of Fauna Sanctuary, Andrew is a card-carrying expert on primates. Pre-eminent primatologist Jane Goodall calls him “a born storyteller” and goes on to say that The Chimps of Fauna Sanctuary is “written with empathy and skill, tenderness and humour.”

Where The Chimps of Fauna Sanctuary was part adventure story and part biography of an incredible family of apes, The Jungle South of the Mountain is full-fledged fiction, described as “a powerful, brilliantly imagined novel about the stories we believe, the lies we tell and the choices we make to protect what we love.” In an unnamed country on the northern coast of South America, a scientist named Stanley is deeply embedded in the life of the rainforest. He’s been studying a troop of capuchin monkeys for eight years—seven since his wife left him, and their mentor mysteriously disappeared. It’s a story that leaps off the page with a tale of mystery, danger, and monkeys.

Andrew has been published in Explore, Outpost, The Globe and Mail, The Walrus, and Utne Reader, among others. He lives in Toronto with his wife, Samantha, and their dog, Max, who, last we heard, sleeps under his writing desk.

Appearing in: 13. In the Jungle 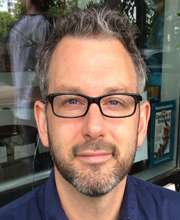