Andrew Westoll’s book The Chimps of Fauna Sanctuary tells the true story of chimpanzees retired to a sanctuary near Montreal after spending decades as test subjects in biomedical research labs. For several months, Andrew worked with these animals in their new home.

“Westoll’s job involved a great deal of poop-scraping, an occasional spitball in the face, and the constant low hum of danger,” notes Maclean’s magazine. As he cares for the chimps, he also grapples with the question of what humans owe to the animals who are our nearest genetic relation.

A national bestseller, The Chimps of Fauna Sanctuary is the 2012 winner of the Charles Taylor Prize for Literary Non-Fiction and a finalist for the BC National Award for Canadian Non-Fiction, Canada’s richest nonfiction prize.

“Andrew Westoll provides an opera of dramatic events, heart-rending tragedies and uplifting triumphs,” writes The Globe and Mail. “For anyone interested in empathy and recovery, his book is required reading.”

The Riverbones, Andrew’s first book, is a memoir based on his search for a rare blue frog in the jungles of Suriname, where he lived and worked as a monkey researcher. “For one whole year, I was like a male version of Jane Goodall, minus the physical endurance, scientific breakthroughs, and universal acclaim,” he says wryly.

The Globe and Mail calls The Riverbones “a freewheeling and vividly written essay on the mysteries and longings of what it is to be human in a world of cynicism and loss—and more significantly, what it is to be hopeful, to persevere, in the search for redemption and beauty.” Andrew is an award-winning journalist who writes about science, travel,

conservation, and culture. His work has been published in Explore, Outpost, The Globe and Mail, The Walrus Utne Reader, among others. He lives in Toronto with his wife Samantha and their dog Max, who sleeps under his writing desk.

www.harpercollins.ca/authors/60085771/Andrew_Westoll/index.aspx (The Chimps of Fauna Sanctuary) 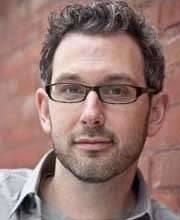 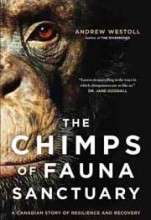