“If there is one thing that drives me to write, it is the sense that there is still a lot of ignorance about what it means to belong to a visible minority,” says Montreal-based writer Anita Anand. “Rather than rant about white privilege, I have chosen to try to bridge the gap in understanding in a gentler way. My hope is that fiction can do that; it can create empathy.”

Her short fiction, collected in Swing in the House, paints an utterly contemporary portrait of Canadian families in their most private moments. From sibling rivalries to fracturing marriages, casual racism to damaged egos, hidden homosexuality to mental illness, Anita’s incisive intelligence, sharp prose, and sly wit illuminate the varied situations that her seventeen stories present.

“Anand has a fine sensibility and an ear not just for dialogue, but also for situation – for parsing the almost invisible shifts in dynamic and power that happen between ordinary people,” says Anna Leventhal in the Montreal Review.

Born in Montreal, Anita has moved back and forth between her hometown and such places as the Bronx; Bedfordshire, England; and Richmond, B.C. In every neighbourhood where she has lived, she has—remarkably—been the only person her age of Indian origin. She knows what it is to be an outsider.

“The people closest to me…are a bit uncomfortable in this world. We are people who have never had the luxury of being part of a majority, whether it is because we don’t look the same or we don’t think the same. We don’t wield any power. And our views of the world are interesting, if only because they are views that aren’t represented very much,” she says.

Anita’s writing has previously appeared in The Globe and Mail, Frostwriting, and the Louisiana Review. Swing in the House is her first book. 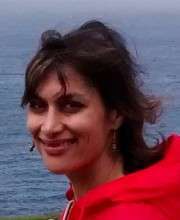