“For my family, and every other Chinese family I knew growing up in Vancouver,” says author and journalist Ann Hui, “food was an obsession.”

From the moral and environmental debate around eating insects, to the heated conversation surrounding the politics of “ethnic” cuisine, to the complexities of nutrition labeling, and the challenges of developing a national food policy, Ann has investigated many corners of the world of food as national food reporter for the Globe and Mail.

In 2016 Ann published a two-part travelogue of Canadian Chinese restaurants, Chop Suey Nation, which took Canadians on a cross-country exploration of the history of the cuisine in Canada. The story captured readers’ attention, and Ann realized there was a larger story waiting to be told. The result is the book Chop Suey Nation: The Legion Cafe and Other Stories from Canada’s Chinese Restaurants. Alternating between stories of her visits to some of Canada’s most iconic, and curious Chinese restaurants (including a remote island shop and a curling club in Thunder Bay), and reflections upon her family’s own experience living in North America, the book offers readers a unique taste of the impact of immigrant foods on Canada’s history.

Appearing in: 30. Chop Suey Nation: The Exceptional Fusion of Canada, China, and Food 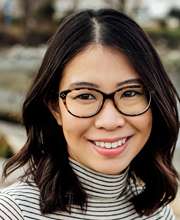