“I never know where things are going ‘til it’s too late to get off the train,” says Ann-Marie MacDonald about the writing process.

Ann-Marie is an author, actor, and playwright. She has co-created and performed original theatrical work such as This is For You, Anna; Nancy Prew: Clue in the Fast Lane, and More Fine Girls. Her play, Goodnight Desdemona (Good Morning Juliet) was honoured with the Chalmers Award, the Governor General’s Award, and the Canadian Authors’ Association Award. Her most recent play, Hamlet-911, is part of the 2022 Stratford Festival season, directed by, and based on an idea by, Alisa Palmer.

Ann-Marie’s novel, Fall on Your Knees, won the Commonwealth Prize, the People’s Choice Award, the Canadian Booksellers Association Libris Award for Fiction Book of the Year, and was short listed for the Giller Prize. The Way the Crow Flies, was also a finalist for the Giller Prize. Ann-Marie is married to theatre director Alisa Palmer, with whom she has two daughters.

In 2014 the family moved from Toronto to Montreal, where Alisa took up the post as Artistic Director of the National Theatre School of Canada. There, Ann-Marie enjoyed being the inaugural Mordecai Richler Reading Room Writer in Residence at Concordia University. She continues to coach students in the Acting and Playwriting Programs at the National Theatre School. She was made an Officer of the Order of Canada in recognition of her contribution to the arts, and her activism and advocacy for LBGTQ2S+ rights.

Appearing in our much anticipated off-season event: Magyk in the Moorlands: An Evening With Ann-Marie MacDonald 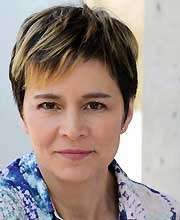