Anna McGarrigle is a Canadian folk music singer and songwriter who performed with her sister, Kate, from the mid 1970s until Kate’s death in 2010. The sisters released ten albums in that time and their songs were widely recorded by other artists such as Linda Ronstadt, Emmylou Harris, Billy Bragg, Maria Muldaur, The Pet Shop Boys, and Judy Collins, among others.

Born in Montreal and raised in Saint-Sauveur-des-Monts in the Laurentian Mountains, Anna was surrounded by informal music in her family and was taught to play the piano by nuns at her village school. She studied art at Ecole des beaux-art de Montreal and, while still students in the mid-1960s, she and Kate belonged to a folk music group, Mountain City Four, with Jack Nissenson and Peter Weldon, but it wasn’t until they were in their mid-20s that they began to perform and record as a duo.

Along with Kate, Anna was appointed as a member of the Order of Canada in 1993 and received the Governor-General’s Performing Arts Award in 2004. The duo also received a 2006 SOCAN Lifetime Achievement Award. Anna’s journalist husband, Dane Lanken, published the musical biography, Kate and Anna McGarrigle: Songs and Stories in 2007.

Since 2010, Anna has continued to write music and perform at special concerts with family members, including her children, Sylvan and Lily Lanken, her niece and nephew, Martha and Rufus Wainwright, and her sister, Jane McGarrigle. She and Jane have written Mountain City Girls about their growing up years and extended Irish-Francophone family background. 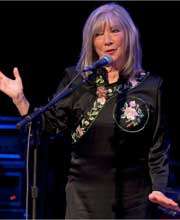