“Curiosity is what drives me, I am interested in everything, and all the people I know and like have fierce passions for places and things.”

Annie Proulx was born and raised in New England. She is a celebrated journalist and author, whose second novel, the critically acclaimed The Shipping News, won both the Pulitzer Prize for Fiction and the National Book Award, and was adapted as a film. Her short story Brokeback Mountain earned The New Yorker, where it was published, a National Magazine Award for Fiction, and Annie won an O. Henry Award for the piece. It was also adapted into a multi-award winning, critically acclaimed film. She is of English and French-Canadian ancestry, and in her newest book, historical fiction Barkskins, a many times great grandfather, an immigrant to New France serves as the model for the first character that is introduced, whose descendants populate the story. “It’s kind of an old-fashioned book,” Proulx says. “It’s long; it has a lot of characters; it takes a big theme. It isn’t a navel-staring, dysfunctional-family thing that’s so beloved of most American writers. It’s different, but I think people probably miss those books that were written some time ago – the big book that was written with care.”

The critics certainly seem to agree. In a starred review Publishers Weekly states that “Annie Proulx’s Barkskins is remarkable not just for its length, but for its scope and ambition. It’s a monumental achievement, one that will perhaps be remembered as her finest work.” The Washington Post calls Barkskins “an awesome monument of a book, a spectacular survey of America’s forests dramatized by a cast of well-hewn characters. Such is the magnetism of Proulx’s narrative that there’s no resisting her thundering cascade of stories. A vast woods you’ll want to get lost in. . . Barkskins is a towering new work of environmental fiction.” 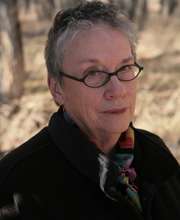