Armand Garnet Ruffo’s scholarly and creative work—strongly influenced by his Anishinaabe (Ojibway) heritage—sheds light on contemporary First Nations’ issues such as the environment, spirituality, education and self-determination. “I draw much of my poetic inspiration from the history and culture of First Nations peoples in Canada. In this regard, it is important for me to write something that engages with society in general, and speaks to both Indigenous and Settler Canadians.”

He is the author of four collections of poetry, Opening In The Sky, At Geronimo’s Grave (winner of the Archibald Lampman Award for Poetry), Grey Owl: the Mystery of Archie Belaney, and The Thunderbird Poems that accompanied his creative biography, Man Changing Into Thunderbird, on the acclaimed Ojibway artist Norval Morrisseau.

Currently an associate professor of English at Queen’s University, Armand teaches Aboriginal literature and creative writing, and lives in Kingston. 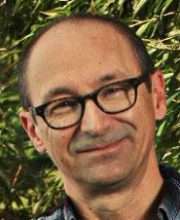