Armand Garnet Ruffo’s work—strongly influenced by his Anishinaabe (Ojibway) heritage—sheds light on contemporary Indigenous issues such as the environment, spirituality, education, and self-determination.

He is the author of five collections of poetry including At Geronimo’s Grave, winner of the Archibald Lampman Award for Poetry, and The Thunderbird Poems that accompanied his creative biography of Norval Morrisseau, Man Changing Into Thunderbird. Armand’s critically acclaimed film about residential schools, A Windigo Tale, won Best Picture at the American Indian Film Festival, and Best Feature film at Edmonton’s Dreamspeaker Film Festival. He also co-edited the 2013 edition of An Anthology of Canadian Native Literature in English.

Armand’s latest poetry collection, TREATY #, is an examination of the meaning of a treaty. It documents his observations of life from an Indigenous perspective, looking at the complex relationships and obligations between nations, humans, and nature. “Most Canadians don’t want to know this stuff,” says Armand, “reconciliation to them is something out there, something intangible that really has nothing to do with them. ‘It happened before I was born.’ We hear that a lot. But who benefited?” 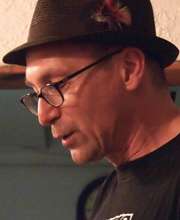