Armand’s scholarly and creative work—strongly influenced by his Anishinaabe (Ojibway) heritage—sheds light on contemporary Native issues such as the environment, spirituality, education and self-determination.

His new book, The Thunderbird Poems, engages with the work of shaman-artist Norval Morrisseau, who drew his first sketches at age six in the sand on the shores of Lake Nipigon. Ojibway legends, conflicted religious beliefs, and political tensions between white and Aboriginal Canadians pervade the celebrated paintings, as well as the poems.

The collection, Armand says, flowed out of work on his previous book, Norval Morrisseau: Man Changing into Thunderbird. “It was a biography that intended to document his life and artistic process,” he notes. “The poems were a natural and spontaneous response to the paintings themselves.”
“Morrisseau is truly a legendary figure, and Ruffo has found the right balance for telling his very human story,” wrote Publisher’s Weekly of the biography.

Armand interviewed about 40 people for Man Changing into Thunderbird, including the painter himself. “Even though Norval was in a wheelchair when I met him, he still exuded charisma, power, whatever you want to call it,” Armand says. “He was very intimidating, but he was kind and generous to me.”

Armand has also edited anthologies of literature, such as An Anthology of Canadian Native Literature in English, and published three other volumes of poetry: At Geronimo’s Grave, which won the Archibald Lampman Award; Opening In The Sky; and the acclaimed creative biography Grey Owl: the Mystery of Archie Belaney, which director Richard Attenborough adapted into a feature-length film. (Grey Owl actually had a close relationship with Armand’s great-grandparents, and lived with them for a time.) 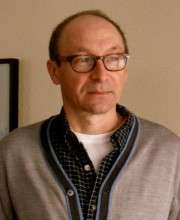