Barbara Bell has been with the Festival since the first meeting in 2009, becoming Artistic Director in 2014.

“I love working in the arts,” she says, “and offering writers and readers a place to come together to celebrate literature. I’m a detail person, so I enjoy the complexities of putting everything together in a way that appears as seamless as possible.”

Besides being a brilliant organizer, she is an actor, theatrical and film producer, television host, editor, and writer.

Barbara won the Eastern Ontario Drama League’s Award for Best Actress for her tilte role in Dacia Maraini’s Mary Stuart, and her has been praised as ‘flawless’, ‘riveting’, and ‘courageous’.

Her one-woman play, Dreams and Desires, and one-act play Pretty Pieces have been staged locally and at fringe festivals across the country. She co-produced a 28-minute film version of Pretty Pieces, which screened at the Reel Heart International Film Festival, among others; several shorts including the award-winning Digging Up Plato; and a feature — Fault — which debuted at the Kingston Canadian Film Festival. 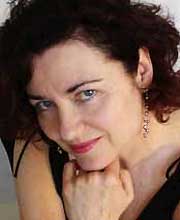