Barbara Bell is a familiar face to the festival crowd – she was at the first festival planning meeting in 2009, and was Artistic Director from 2014-2020. “I’m interested in creative exploration of the big questions,” she says, “why am I here? What is my purpose? How do I live my most authentic life?,” so it’s no surprise to see her new career path, as a Certified Integral Professional Coach with her own practice, TurasLife Coaching.

Barbara has flexed her creative muscle in many ways, as an actor, theatrical and film producer, television host, editor, and writer. Barbara won the Eastern Ontario Drama League’s Award for Best Actress for her ‘courageous’ and ‘riveting’ title role performance in Dacia Maraini’s Mary Stuart. 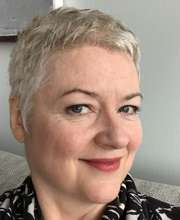