“Without doubt one of the best and bravest reporters in Afghanistan”. – New Zealand foreign correspondent Jon Stephenson

Bilal started working for the BBC after the terrorist attacks of 11 September 2001 and covered the US bombing campaign and invasion of Afghanistan. He later attended Middlebury College in the US, where he studied linkages between warfare, drugs and terrorism, comparing the FARC in Columbia with the Taliban in Afghanistan. After completing his university studies, he returned to Afghanistan, where he worked as a full time reporter for BBC News in Kabul for over a decade until coming to Canada during the US withdrawal from Afghanistan in August of this year.

Appearing in: 20. The Big Idea: Addressing a Crisis 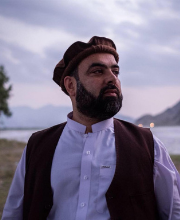