Bill Richardson is the author of several books, most notably Bachelor Brothers’ Bed and Breakfast, which won the Stephen Leacock Memorial Medal for Humour, and a novel for children, After Hamelin, which won the Silver Birch Award. He is also one of Canada’s best–known radio broadcasters.

Bill was born in Winnipeg, Manitoba, and attended the University of Winnipeg. After spending a year in Montpellier, he moved to Vancouver, where he completed a Master of Library Science degree at the University of British Columbia.

He began his broadcasting career with the CBC as a regular contributor and guest host on Vicki Gabereau’s program, and moved on to host As You Like It, a classical music request show, before becoming host of Richardson’s Roundup and Bunny Watson. He has also been a frequent guest host of Sounds Like Canada. Currently Bill hosts Saturday Afternoon at the Opera and Sunday Afternoon in Concert.

Currently, Bill lives in Vancouver. A phenomenally popular interviewer and host with readers and authors alike, he’s renowned for his wit, his charm, and his empathy. This is his third appearance at Kingston WritersFest. 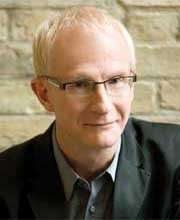