Brett Christopher is Managing Artistic Director of Thousand Islands Playhouse in Gananoque, Ontario. This role represents the culmination of his longstanding love for the theatre, with past job titles ranging from Marketing Director to General Manager.

After working in Toronto for a decade, Brett returned to Kingston where he became a driving force in the region’s arts community as Theatre Kingston’s Artistic Producer. Along with producing a 3-show season annually, Brett sat on multiple boards, worked with a variety of local cultural groups, and founded both The Kick & Push and the Storefront Fringe Festivals.

Brett has been an active member of the Canadian theatre community since graduating from George Brown College’s theatre program nearly 20 years ago. He has worked with a variety of theatre companies as an actor, director, and producer, including the Stratford Festival, Arts Club, Canadian Stage, Buddies in Bad Times Theatre, Western Canada Theatre, Sunshine Festival, Actors Repertory Company, and others.

He was the recipient of both the Masques and Mecca Awards for his performance of the solo show I Am My Own Wife, and his direction of The Tempest was named one of the country’s top productions by Robert Cushman of the National Post. 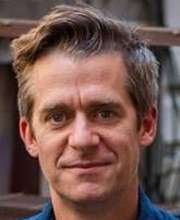