Cyrena Fiel is a 16-year-old music theatre student at Etobicoke School of the Arts. Inspired by the world, and driven by passion, Cyrena is an artist – singer, dancer, songwriter, and actor. She first began performing at the age of 11 in her first musical,  and most recently made her Toronto Fringe Festival debut in “Drama 101” this past summer.

Her greatest accomplishment to date has been releasing her debut single, “Love”, a song close to her heart, available on every streaming service.

But apart from her pop-star and broadway aspirations, Cyrena adores learning, languages, and all genres of writing. Since having the honour in competing in Canada’s national Poetry In Voice competition in Winnipeg last March, her love for poetry and spoken word has grown enormously. As of now, she is currently working on an original EP while performing and attending school.

Appearing in: 47. And the Journey Continues 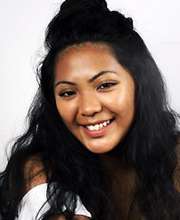