Darryl Joel Berger is a writer, artist and graphic designer whose poems and short stories have appeared in numerous anthologies and journals, including the Prairie Fire, The New Quarterly, Windsor Review, Queen’s Feminist Review, Kiss Machine, The Fiddlehead, Geist and Event. His short-story collection, Punishing Ugly Children, won the David Adams Richards Prize for best unpublished manuscript, and his story “Scissors” was a finalist in the 2007 Commonwealth Short Story Competition.

D. J. was raised in Perdue, Saskatchewan, the second of seven children born to a barber who painted barns and granaries for extra cash. Trained as a graphic designer, he started out sending illustrations to literary magazines with a little story attached, which, somewhat to his dismay, would be published without the drawing. When he moved to Kingston, he joined the Ban Righ writing group started by Bronwen Wallace, where he found his wife and encouragement for his quirky, original flash fictions.

Marked by a sophisticated whimsy, his work marries words and pictures so tightly that it’s almost impossible to tease them apart. His website, red-handed.blogspot.com — “drawing and writing caught out” — was launched three years ago as a showcase for his eclectic artistic vision, which evolves the notion of “book” into a small and precious object than can be contained in a cigar tin.

His first book, Punishing Ugly Children, will be published by Killick Press in Fall, 2010. 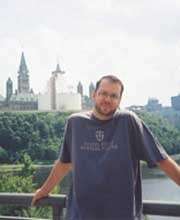