When Daemon Fairless set out to write his new book Mad Blood Stirring: The Inner Lives of Violent Men, he wasn’t interested in “the 1 to 3 percent out there who are a psychopath and don’t have compassion. What I was more interested in was how is it that guys like you and me under the wrong conditions end up being part of a military force or a political force that dehumanizes another group of others. It’s us temporarily, selectively shutting down our compassion, our ability for empathy, in a way that is analogous to the psychopath.”

The book offers an exploration, both scholarly and deeply personal, of the male compulsion towards violence. “I looked inside in a very unpleasant way,” says Daemon, “I mean, it really tore me apart to write this”. The result “is a brave tour… of masculinity’s darkest corners” says author and journalist Ian Brown, “it is as alarming to read as it is compelling.”

Daemon is a writer and journalist with a master’s degree in neuroscience. He has worked as a producer on CBC Radio’s flagship current affairs show As It Happens with Carol Off, and as a print journalist for the science journal Nature.

He lives in Toronto with his wife and daughter.

Appearing in: The Big Idea: Racism, Sexism, Xenophobia, and Violence: Connection and Cure 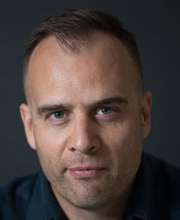