Daniel Poliquin is one of Canada’s leading francophone writers. He has won awards for both his fiction and political writing, making him an inspired choice as René Lévesque’s biographer in the Penguin series, Extraordinary Canadians.

The author of nearly a dozen books, he holds Masters degrees in both German and Comparative Literature and a doctorate in French Literature. His novel Visions de Jude (translated into English as Visions of Jude and republished as La Côte de Sable) earned him the Grand prix du Journal de Montréal and the Prix littéraire Le Droit; his novel L’écureuil noir (Black Squirrel) was nominated for the Governor General’s Award and won the Prix littéraire Le Droit; and L’homme de paille (The Straw Man) won the Trillium Book Award. Poliquin was also awarded the Shaughnessy Cohen Prize for Political Writing for In the Name of the Father: An Essay on Quebec Nationalism (Le Roman colonial). His most recent novel, A Secret Between Us, was shortlisted for the Scotiabank Giller Prize, while the French version, La Kermesse, won the Ottawa Book Award and was also nominated in for the Trillium Book Award.

All of Daniel’s novels have been translated into English, most of them by Kingston writer and translator Wayne Grady. Daniel is a noted literary translator himself, having translated into French several works by Mordecai Richler, Jack Kerouac, W.O. Mitchell, Matt Cohen, and Douglas Glover.

Daniel is also a Chevalier in the Ordre de la Pléiade, a recipient of the Queen’s Jubilee Medal, and a Member of the Order of Canada. 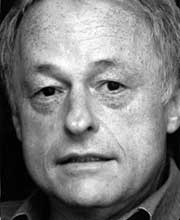