“Two things I’ve learned is that you can make a difference, but it’s really hard,” says author Dave Meslin. “What I’m focusing on these days is making it easier. People see working outside of government or with government as a binary option… I’ve been having a lot of fun playing with the space in-between.”

Dave Meslin is an activist, artist, and community organizer who has been alternately described as a “wizard,” a “mastermind,” “the ultimate ideas guy,” a “mad scientist,” and a “start-up genius” who inspires better engagement between governments and citizens. He formed the Toronto Public Space Committee, which was chosen as the “Best Activist Group” by both EYE Weekly and NOW magazines, and which publishes Spacing Magazine, the award-winning urban affairs publication. Dave appears as an expert on political engagement on national media, and his TED talk about apathy has more than 1.5 million views.

Dave’s book, Teardown: Rebuilding Democracy from the Ground Up, argues that partisanship, centralized power, and rigged systems all contribute to growing voter cynicism. But he also argues that we can fix things by turning elite power structures upside down and giving a voice to ordinary people.

Appearing in: 36. The Big Idea: Is Democracy Doomed? 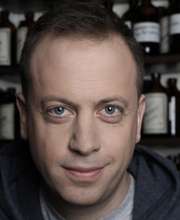