David Bezmozgis is an award-winning writer and filmmaker. His books include The Free World, The Betrayers, and the short story collection, Natasha and Other Stories, which won the Toronto Book Award and the Commonwealth Writer’s Prize for First Book. He has been twice nominated for the Scotiabank Giller Prize and the Governor General’s Literary Award. His writing has appeared in many publications, including The New Yorker, Harper’s, Zoetrope: All-Story, and Best American Short Stories.

Immigrant City, David’s latest book, represents his first collection of short stories in more than a decade. In a starred review, Quill & Quire states that “this new collection resonates with power and poignancy”, and the Globe and Mail praised his “uncanny ability to write sensitive, sympathetic prose.”

A graduate of the University of Southern California’s School of Cinematic Arts, David pairs his literary output with an active filmmaking career. His first feature film, Victoria Day, premiered at the Sundance Film Festival, and subsequently received a Genie Award nomination for Best Original Screenplay. His second feature film adapts his story Natasha, and was released in 2017. He is the Director of the Humber School for Writers. 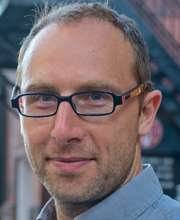