Dazzling multi–instrumentalist David Gossage is so versatile and accomplished that the music critic at the Gazette named him “Montreal’s secret weapon.” Able to switch from flute to harmonica, guitar, or whistles with ease, Dave is comfortable with many styles of music, including African, classical, rock and funk. But he is probably best known for his jazz and Celtic playing, particularly with the Juno–nominated Orealis, and his latest band, Dave Gossage and the Celtic Mindwarp.

As a flautist Dave has performed for The Shalabi Effect, Michel Rivard, Natalie Simard, Cirque du Soleil and many more, and has participated in numerous National Film Board and CBC radio, television, film, and live studio recordings.

As a composer and arranger, Dave has worked in theatre, film, and poetry. His most recent arrangements for the animated short, When the Day Breaks, won a Gemini Award as well as the jury prize at the Cannes Film Festival, and his work was nominated for an Oscar.

In “River City: The Reading” Dave collaborates with Trevor Ferguson (John Farrow) in a dynamic and dramatic performance of Trevor’s novel, River City. Dave’s music brilliantly sets up the shifts of tone and drama as the text bounds through 450 years of Montreal history, in a story that combines beauty and tragedy, folklore and terror, humour and adventure. 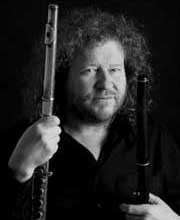