“The most consistently interesting novelist of his generation,” was Time Magazine’s verdict in 2007 when they listed David Mitchell, the only literary writer, as one of the 100 most influential people in the world. By then his first novel, Ghostwritten, had won the John Llewellyn Rhys Prize (for best work of British literature by an author under 35) his next two, number9dream and Cloud Atlas, were shortlisted for the Man Booker Prize, and he had been selected as one of Granta’s “Best of Young British Novelists.”

David has continued to impress the literary world and the reading public with four more novels, Black Swan Green, The Thousand Autumns of Jacob de Zoet, The Bone Clocks, and now, Slade House. He is the author of many short stories and essays, and, with his wife, Keiko Yoshida, co-translator from Japanese of The Reason I Jump: One Boy’s Voice from the Silence of Autism by 13-year-old Naoki Higashida. He is also the librettist for two operas, Wake and Sunken Garden that have been performed in Holland and England, and had a cameo role in the film of his book, Cloud Atlas.

Though he was born and raised in England, David Mitchell spent eight years in Japan and now lives and works in Ireland with his wife and their two children. In his books, he employs a wide variety of settings and characters, and is comfortable with multiple story lines. Though he is always ready to try something new – Slade House started out as a Twitter story of 280 tweets – his books have recurring characters and other connections that resonate with his readers. No wonder Esquire magazine calls him “A genre-bending, time-leaping, world-travelling, literary magician.” 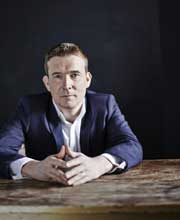