The 2004 Indian Ocean tsunami claimed the lives of over a quarter of a million people and devastated millions more. Playwright David Yee dramatically illustrates the ripple effect of this disastrous event in his Governor General’s Award-winning play, Carried Away on the Crest of a Wave.

The Toronto Star called the play “a series of vignettes to show that we are all interconnected, no one is truly alone and we have to be sensitive to other people’s needs and wants.” NOW Magazine praised it for being “rich with poignancy, tragedy and humour…Yee’s clever, insightful writing rarely fails to draw a response, whether he’s using his trademark off-centre laughs or a solemn moment to make a point.”

Born and raised in Toronto of Chinese and Scottish ancestry, David Yee is a graduate of the University of Toronto’s and Sheridan College’s drama and theatre programs. He is a Dora Mavor Moore Award-nominated actor and the artistic director of fu-GEN Asian Canadian Theatre Company. His earlier plays include paper SERIES and Lady in the Red Dress, which was nominated for a Governor General’s Award. 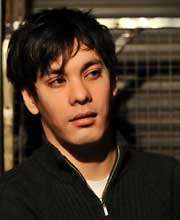