“Never once in my life had I dreamed of being in bed with a convicted killer.”

For almost six turbulent years, award-winning writer Diane Schoemperlen was involved with Shane, a prison inmate serving a life sentence for second-degree murder. This Is Not My Life: A Memoir of Love, Prison, and Other Complications is the story of that romance. In this candid, often wry, sometimes disturbing story of that relationship, which surprised no one more than herself, Diane takes the readers along as she journeys through the prison system with Shane. This relationship enlarged her capacity for empathy and compassion and also forced her to examine herself more deeply.

Born and raised in Thunder Bay, Diane was educated at Lakehead University. Famous for her original experiments with form, she has published critically acclaimed books of short fiction and novels, including In the Language of Love, about which New York Times reviewer Jay Parini wrote, “…I feel quite certain that Diane Schoemperlen is a novelist of real promise. In the Language of Love adds to the lexicon of contemporary fiction, revealing ‘the splendid terrors of daily life’ with considerable grace.”

Diane’s story collection, The Man of My Dreams, was a finalist for the Governor General’s Award for Fiction. She won the coveted award for Forms of Devotion, which the jury called “a witty and brilliant collection of stories… A virtuoso performance.”

Appearing in 1. Loving the Bad Boy: A Story of Prison Romance, 19. Honesty, Misery, & Memory: Writing Your Life as Story 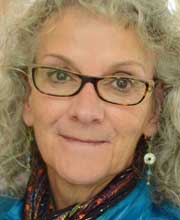