For almost twenty years, Dorie Greenspan has been writing cookbooks—nine of them, in total—and she has won five James Beard and IACP awards for them, including Cookbook of the Year.

Co–author of another two books, she is also a contributing editor to Parade Magazine, and a longtime contributor to Bon Appétit. For the past six years she has been food critic for the Louis Vuitton City Guide to New York. Her blog has been selected by the Times Online as one of the Fifty World’s Best Food Blogs.

In recognition of her achievements, Dorie has been named to the James Beard Who’s Who of Food and Beverage in America.

Dorie’s latest book, Around My French Table, is an intimate compendium of recipes from France—food she makes at her home there, food her French friends make, and food she fell in love with in the simple bistros, wonderful markets, and pastry shops throughout the country. There are recipes for nibbles and hors d’oeuvres and great first courses and salads; recipes for main courses of every kind; soups, of course; vegetables, naturally; and more than fifty terrific desserts, all delicious, all do–able and all fun to do.

Dorie is married, with a son. She also has three kitchens: she commutes from New York City to Westbrook, Connecticut, to Paris, France and back again, and says that she never knows which pantry needs more vanilla or which place has which charger for which piece of electronic gear. 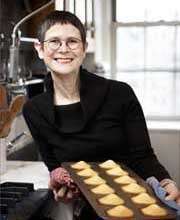 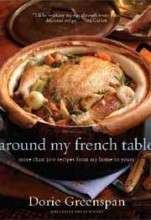