Eden Robinson is a novelist and short fiction writer from the Haisla and Heiltsuk First Nations. She has received numerous awards for her writing, including the Writers’ Trust Engel/Findley Award.  Her first novel, Monkey Beach was shortlisted for the Giller Prize and a Governor General’s Literary Award, and received the Ethel Wilson Fiction Prize. Son of a Trickster, the first volume in the Trickster trilogy, was also shortlisted for the Giller.

Return of the Trickster is the final book in her Trickster series, which follows teen protagonist Jared as he comes to terms with sobriety, a broken heart, and the magical powers inherited from his father Wee’jit, a 500-something-year-old Trickster of Indigenous legend. The Toronto Star calls the book “pure enjoyment. . . . Robinson manages to skillfully pull off a series that accomplishes a whole number of things at the same time: this novel—and the trilogy as a whole—is a thrilling, magic-realist adventure story; a compelling domestic novel that explores the various kinds of family . . . a grim ride into sadistic darkness . . . and wickedly funny, hard-edged and sardonic, tender and emotionally true.”

Eden has been a Writer-in-Residence at the Whitehorse Public Library, and works with the Writers in Electronic Residence program, which links schools across the country with professional writers.  Eden lives in Kitamaat Village, BC. 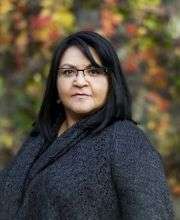