“Listen, it probably comes down to this” says Elan Mastai, discussing his novel, “I didn’t get a jet pack for my 9th birthday; I still didn’t get one for my 16th, and I didn’t get one when I turned 25. So now that I’m in my forties, I wrote out what it might be to live in this world where I could finally have a jet pack.”

Elan has spent 15 years as a screenwriter for Fox, Sony, Warner Brothers, and Paramount. His films include Alone in the Dark, the Samaritan, and the Canadian Academy and the Writers Guild of Canada Award-winning comedy What If. The manuscript for his first novel, All Our Wrong Todays, described as “fearlessly funny” by the Washington Post, sparked a publisher bidding war.

The book follows Tom, a voyager from an alternate, utopian 21st century, who is marooned in our world after toying with his father’s time machine. USA Today called it “Instantly engaging. . . . A timeless, if mind-bending, story about the journeys we take… that show us who we might be, could be—and maybe never should be—that eventually leads us to who we are.”

Elan lives in Toronto, Ontario with his family and a dog named Ruby Slippers. 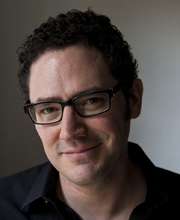