“From the age of 23,” says author Emma Donoghue, “I have earned my living as a writer, and have been lucky enough to never have an ‘honest job’ since I was sacked after a single summer month as a chambermaid.”

Emma’s passion for writing is clear — she has tried her hand at everything from kidlit, YA, historical and contemporary fiction, literary history, screenplays, playwriting, and radio drama, and has won countless awards in the process. She experienced phenomenal success with Room in 2010, which won the Rogers Writers’ Trust Fiction Prize and the Commonwealth Prize for Fiction, amongst other accolades.

Emma later adapted the book into an Oscar award-winning film. Her screenplay was nominated for its own Oscar and won the Canadian Screen Award for Best Adapted Screenplay, as well as over a dozen other awards.

Her latest novel, Akin, marks her return to contemporary fiction. The story explores the odd-couple pairing of a retired New York professor and his eleven-year-old great-nephew going to the French Riviera to unearth the professor’s mother’s wartime secrets.

After years of commuting between England, Ireland, and Canada, Emma eventually settled in London, Ontario, where she lives with her partner and two children. 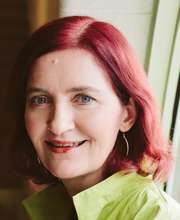