“There are all sorts of historical continuities in life, but the past is always strange.” Emma Donoghue, The Guardian.

Emma Donoghue, author of eight previous novel including Frog Music and Slammerkin, experienced phenomenal success with Room, which was published to wide acclaim and became an international bestseller. The book was adapted by Emma herself into an award-winning film (Brie Larson won performance by an actress in a leading role, for her portrayal of Ma) and Emma herself was nominated for an Oscar for the screenplay.

Now, Emma is back with The Wonder. Long a writer of historical fiction, Emma admits that the past holds a fascination for her. “My new novel is about a little girl in Ireland in the 1850s who doesn’t eat, before anorexia was identified. Back then if you had a kid who wasn’t eating, all sorts of theories would swirl around her. Some would see her as physically sick, others emotionally sick, others superpowered.” Like Room before it, this complex and beautifully constructed novel asks the reader to consider challenging ethical questions.

Written with the spare and propulsive tension that made Room un-put-downable, The Wonder is a compelling character study, and a complex examination of the mysteries of faith, love, and the nature of evil.

Born in Ireland, Emma says, “I’m ‘Irish Canadian,’ ... I lived in Ireland until I was 20, then England … then Canada. It’s just a handy way of saying I have a foot in two camps. Ideally I’d want British newspapers, the weather of the south of France, American television and the polite manners of Canada.” 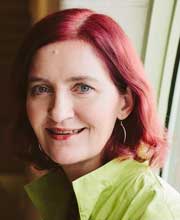