Eric Friesen’s name and voice are well known to radio listeners. A longtime radio personality who has been called one of the most gifted broadcasters in the industry, Eric has hosted many CBC flagship programs, including All in a Day, Radio Noon, The Eric Friesen Show, In Performance, and Studio Sparks. He was also responsible for the long-running Ideas program.

Born in Alton, Manitoba, Eric became hooked on radio at an early age and worked his first on-air shift when he was just a teenager. He has also worked in American public radio and recently created three major radio documentary series featuring Pinchas Zuckerman, Emmanuel Ax, and Peter Oundjian.

Over the course of his broadcasting career, he has interviewed almost every important figure in music today, including Yo-Yo Ma, Renée Fleming, Lyle Lovett, Chris Botti, k. d. lang, Wynton and Branford Marsalis, and many more.

Since leaving the CBC at the end of 2008, Eric has been busy serving a wide variety of major cultural organizations in Canada. He recently completed six podcast documentaries called Eric Friesen Presents for artsalive.ca, marking the 40th anniversary of the National Arts Centre Orchestra. In July 2009, he interviewed novelist Ian McEwan on the key role of music in his novels for Angela Hewitt’s Trasimeno Music Festival in Umbria. In 2010, he interviewed Vikram Seth on the same stage. The same year, he was nominated for a National Magazine Award for his column in Queen’s Quarterly about “Four Last Songs” by Richard Strauss.

In 2011, Eric became the Chair of Kingston WritersFest’s Board of Directors and continued to serve as a Director until 2013. Eric and his wife, artist Susan Friesen, live on Amherst Island near Kingston, Ontario. 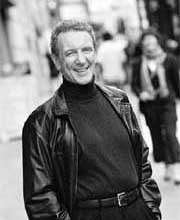