Erin Ball identifies as a white, Mad and Disabled circus artist living on the traditional territory of the Mississaugas of the Ojibwe; Katarokwi, also known as Kingston, Ontario. She runs Kingston Circus Arts and is the co-founder of LEGacy Circus (a performance company co-created with Mad artist, Vanessa Furlong). Erin took a year off in March 2014 due to life changing events that resulted in having both lower legs amputated. She has since returned to her passion of training, coaching and performing with a focus of including as many people in her audiences, as collaborators and performers in shows, as well as students in her classes. She has traveled world-wide to perform and teach. She strives for representation, centering access and inclusion in the arts.

Erin loves collaborating, adapting and creating new/different ways of executing skills. In 2017, Erin developed a course and manual for movement-based coaches (specifically circus but it applies to movement in general) called Flying Footless. The course centres around dismantling ableism, Disability theory, an access-centered method of teaching and suggestions to work towards welcoming the Disability community into movement-based classes. She has won accessibility awards and in 2018, she was the recipient of the Creator’s Award at the Mayor’s Art Awards.

Appearing in:
19. Fantastic Figures: the Magic in All Bodies 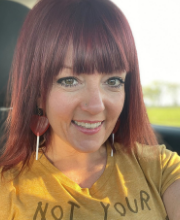