Like Joanne Kilbourn, Gail was a professor herself. She taught English at First Nations University of Canada in Saskatchewan until retiring, and she has served as writer-in-residence at public libraries in Toronto, Calgary, and Regina. Many of her books have been adapted for television, and she has written several plays that have been produced at the Globe Theatre in Regina. She has written radio plays for CBC Radio, which have been broadcast on public radio networks in six countries. She has also worked as an arts columnist on CBC Radio Regina.

Gail’s novel, A Colder Kind of Death, won the Crime Writers of Canada Arthur Ellis Award, and Reader’s Digest named her Canada’s Best Mystery Novelist in 2008. She has been praised for her suspense skills, but also for her stories’ elegance, sense of place, and true-to-life form.

Born and raised in Toronto (where she claims to have learned to read from the tombstones in Prospect Cemetery), Gail Bowen now lives in Regina.

Appearing in: 23. WS – Writing a Bestseller, 28. Mystery Maven: Coffee and Cozies with One of Canada’s Top Mystery Writers 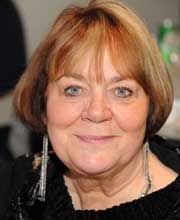