“One of the things you learn in film is how to make complicated lighting setups,” says author and artist Genki Ferguson. “You want to illuminate a subject. You want to have more than just one spotlight, you want to add depth to a scene and illuminate different parts of the frame… there are all these different angles, each viewpoint is like another set of lights.”

Genki grew up in a family of writers (including Giller-winning writer Will Ferguson) in Calgary. He spent much of his childhood in the subtropical island of Kyushu, Japan, where his mother’s family still resides. Still in his early 20’s, Genki is the recipient of a Helen Pitt Award for visual arts, and recently completed a degree in Film Production.

His debut novel Satellite Love, set in 1999 Japan, is a heartbreaking and beautifully unconventional story about a girl, a boy, and a satellite – and a bittersweet meditation on loneliness, alienation, and what it means to be human. Much of the story reflects Genki’s own experience of disconnection and isolation after moving from his home to Vancouver for school. The novel was written during his time at Emily Carr University in the Film + Screen Arts program. “I was initially planning for the concept — a girl falling in love with a satellite — to be a short film,” Genki says, “but didn’t feel confident enough in my directing ability to pull it off.” It appears he made the right choice. The Calgary Herad says the book “makes for an impressively assured debut, particularly for a 23-year-old” and author Ruth Ozeki says “Satellite Love is one of those rare and affecting novels that will leave you breathless, charmed, and deeply thoughtful.”

Appearing in:
2. Love is in the Air: An Unconventional Romance 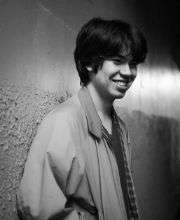