Gil Adamson’s first novel, The Outlander, recently released in paperback, was ten years in the making, but it immediately caught the attention of readers, reviewers and prize juries. It won the Amazon.ca/Books in Canada First Novel Award, the Hammett Prize for Crime Writing and the ReLit Award and was shortlisted for the Commonwealth Writers’ Prize and the Trillium Award.

“A riveting tale of a woman’s thirst for freedom,” according to Entertainment Weekly, the novel tells the story of a young woman who has just killed her husband and is fleeing into the Alberta wilderness to escape her ruthless brothers-in-law. The book was championed by actor Nicholas Campbell in the 2009 Canada Reads competition, and it has already been optioned for film.The Outlander is one of the contenders in this year’s Kingston Reads and will be championed at the Friday night event, Battle of the Books.

Gil has also published a highly acclaimed volume of short fiction (Help Me, Jacques Cousteau) and two collections of poetry (Ashland and Primitive). She lives in Toronto with fellow writer Kevin Connolly. 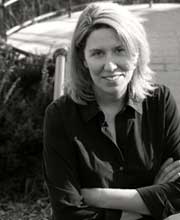