Most recognized for his bestselling John Cardinal crime series, set in the Northern Ontario landscape of his childhood, Giles Blunt has also written for television, where his credits include episodes of Night Heat, Law and Order, and Street Legal.

His talents don’t end there. Giles has published two stand-alone novels—No Such Creature, a witty road story set in the American southwest, and the IMPAC nominated literary novel Breaking Lorca, which the Globe and Mail described as a “tour de force, sorrowing and direct, sharp as a knife blade, beautifully written—an unforgettable window into the human capacity for cruelty and courage.”

All this—and he also mixes a mean drink and plays the blues guitar.

Forty Words for Sorrow, the first book in his John Cardinal series, won the British Crime Writers’ Macallan Silver Dagger Award. “It’s almost a crime how beautiful Blunt’s prose is,” said the Quill and Quire of A Delicate Storm, the second book in the series. “You are preternaturally there with these characters, crunching across frozen parking lots, shivering at stakeouts in the woods.” The book went on to win the Arthur Ellis Award for Best Novel.

Crime Machine, the fifth riveting installment in the series, focuses on Cardinal’s investigation into the deaths of two Russian travelers at Algonquin Bay. “As always with Blunt, beyond the crime and the mystery it’s the humanity of the characters that makes the book so good,” says the National Post. “Crime Machine is an excellent return to Algonquin Bay and also a fresh start, not just for Cardinal but for the series.”

A resident of New York for over twenty years, Giles now makes his home in Toronto. 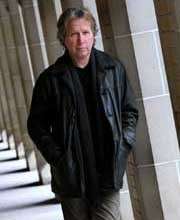 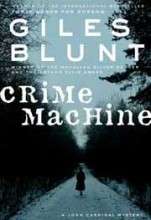