“The opposite of feeling alienated is belonging,” Khan told Yasmine Aslam-Hashmi. “And the only way we can feel that we belong is if we can see ourselves mirrored in some way or represented. That is where my drive to tell stories comes from.”

H.N. KHAN is a first-time author. Born in Pakistan, he immigrated to Canada at the age of seven and grew up in Regent Park, a low-income community housing project in Toronto. After graduating with a business degree he decided to drop out of law school to pursue a career in Toronto’s start-up scene. Since then, he’s helped build and market software that’s used by millions around the world. He is a recent graduate from Humber’s School for Writers’ correspondence program.

His Young Adult novel, Wrong Side of the Court, is a first-generation Pakistani coming-of-age story that follows fifteen-year-old Fawad as he grapples with the world around him and dreams of the future. Quill & Quire calls it “finely crafted and well paced, it’s hard to believe it’s [Khan’s] literary debut.”

Appearing in: 7. Whose Dream is it, Anyways? 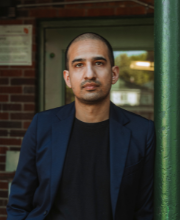