“In prose that moves like a clear river,” writes the New York Times Book Review, “Rustad has done what the best storytellers do: tried to track the story to its last twig and then stepped aside.”

Lost in the Valley of Death, Harley Rustad’s riveting work of narrative nonfiction, centers on the unsolved disappearance of Justin Alexander Shelter, an American backpacker in India. He was one of at least two dozen tourists who met similar fates in the remote and storied Parvati Valley. Rustad’s book is at once about one man’s search to find himself, and about all of us and the sometimes extreme ways we seek fulfillment in life.

Harley Rustad is a features editor at The Walrus magazine, a faculty editor at the Banff Centre’s mountain and wilderness writing residency, and the founder of the Port Renfrew Writers’ Retreat. His writing has appeared in Outside magazine, The Walrus, the Globe and Mail, Geographical, the Guardian, and CNN.

His first book was Big Lonely Doug: The Story of One of Canada’s Last Great Trees, which details how a logger saved the second largest Douglas-fir in Canada, turning it into an environmental icon.

A fellow of the Royal Geographical Society, Harley is originally from Salt Spring Island, BC.

Appearing in: 14. Death by Misadventure: A Backpacker’s Disappearance in the Himalayas 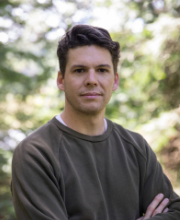