“Akler delivers the goods with originality and flare, with language as gorgeous as a Jean Harlow pin-up and dialogue sharper than a burst from a Thompson submachine gun.” — The Globe and Mail.

Howard Akler is the author of four books including The City Man, which was nominated for the Amazon.ca First Novel Award, the City of Toronto Book Award, and the Commonwealth Writers Prize, and Men of Action, which won the Canadian Jewish Literary Award, was shortlisted for the Toronto Book Award, and was featured as a part of the 2015 New York Times Gift Guide. Howard writes columns and book reviews for numerous publications, including the Toronto Star and the Los Angeles Review of Books.

His latest novel, Splitsville, recounts a bookseller’s love affair, start to finish, against the backdrop of a city in protest against the proposed construction of the behemoth Spadina expressway. Author Kerry Clare praises “the novel’s attention to language, its literary references, its bookstore setting, the subtlety of its plot and pacing, its absolutely perfect conclusion, and the mystery at its core, questions without answers… And now that I’ve read to the end, I want to give a copy to everyone.”

He lives in Toronto. 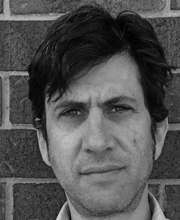