Iain Reid is the author of two acclaimed memoirs: One Bird’s Choice, about his decision, as an overeducated and underemployed young adult, to move back in with his parents on their farm; and The Truth About Luck, which details a road trip Reid took with his grandmother. His debut novel, I’m Thinking of Ending Things, has been translated into more than twenty languages and has been adapted into a film directed by Oscar-winner Charlie Kaufman. His second novel, Foe, is also being adapted for film, with Reid cowriting the screenplay.

With his upcoming novel, We Spread, Iain Reid returns with another work of shocking, philosophical suspense. The novel is all at once compassionate and uncanny, being told in spare, hypnotic prose. In We Spread, Iain Reid explores questions of conformity, art, productivity, relationships, and what it ultimately means to grow old.

Iain lives in Kingston, but he still spends a fair bit of time at his family’s farm, where he talks to the sheep when he’s at a crossroads with his work. Once the sheep have been bribed sufficiently with hay, Reid notes that they make very good listeners. 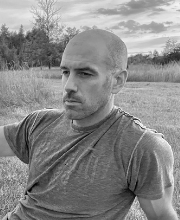